EUROSERVER, a leading EU-funded research project, is paving the way toward lower energy consumption in data centers. Based on the concept of chiplets, where multiple silicon subsystems are mounted in an integrated device, along with an associated new groundbreaking system architecture, the project has enabled more energy-efficient servers and has even inspired startups motivated by the new technology.

Delivering the potential to reduce energy consumption in data centers by at least half, the breakthrough leads to substantial reduction in the total cost of acquisition and operation (total cost of ownership (TCO).

EUROSERVER created system architecture and runtime software innovations: the sharing of peripheral devices, access to system wide memory, compression of data to better utilize memory and lightweight hypervisor capabilities. These are being demonstrated with applications across the data center and telecommunications domain. All reduce energy consumption and have been developed for systems built around energy-efficient 64-bit ARM®v8-based architecture.

Two startups have already been launched, inspired by the technology created during the project:

Data centers account for a huge consumption of power. If all the data centers in the USA alone were a country, their energy consumption would rank 12th in the world. As the capacity and number of data centers increase, so do the financial and environmental impacts of their vast energy use. EUROSERVER’s innovation will take efficient and scalable ARM processors and use the flexibility of a System-on-Chip (SoC) design at the system level to create a new type of server.

This evolution is comparable to the transition from mainframe computers to mass-produced personal computers (PCs) in the 1980s, which in turn evolved into modern servers. With smartphones the contemporary equivalent of 1980s PCs, now is the time to take advantage of their architectural flexibility and evolve them to create the energy-efficient servers of the future.

Isabelle Dor, Research Engineer at CEA and EUROSERVER Coordinator, said: “EUROSERVER is delivering vital energy savings for data centers and CEA/LETI is proud to coordinate this important EU-funded project. The SoC architectures and advanced packaging solutions being developed bring us one step closer to scalability and power efficiency in data centers. We are also delighted that two startups have been created to leverage innovations from the project.”

“ARM is committed to enabling energy-efficient computing. Together, the consortium helped define a set of Reliability, Availability and Serviceability (RAS) requirements for enterprise servers,” said John Goodacre, director of technology and systems, ARM. “ARM subsequently enhanced its processor architecture with the ARMv8.2-A release, which included a specific extension in support of RAS.”

Simone Cabasino, President in NEAT, noted: “We are happy to design, develop and bring-up the board and the system for the project, and we are also proud to be a technology partner of the KALEAO startup.”

Julian Chesterfield, Director of the Emerging Technology Group at OnApp Ltd. reports: “The EUROSERVER design highlights the trend for power efficient and high density computing environments entering the data center. As a cloud infrastructure provider, our customers will benefit from the improvements in the virtualization platform, being able to handle more end-users while at the same time benefiting from lower electricity costs.”

Giampietro Tecchiolli, CEO of KALEAO Ltd., stated: “We started KALEAO with the goal to revolutionize the server market by enabling true convergence at web-scale with our KMAX products. EUROSERVER has been a source of partnerships, inspiration, expertise and technology contributions. In sharing many of the EUROSERVER paradigms, we use ARM cores in order to reduce the costs and energy for a server while achieving unprecedented compute density.”

Per Stenström, Professor at Chalmers University of Technology, Sweden, said: “This project gave us the opportunity to develop novel memory optimizations, including memory compression and hybrid memory management technologies, for servers and high-performance platforms.”

Then, as founder and CTO of ZeroPoint Technologies AB, Per Stenström added: “Our results at Chalmers in EUROSERVER are so promising that we created this spin-off company with the mission to commercialize these memory compression technologies; we are very happy with the interest that we have already seen among several potential customers.”

Manolis Katevenis, Head of the Computer Architecture Lab at FORTH/ICS, said: “The new UNIMEM architecture, to which we made key contributions, allows communicated data to enter directly into receiver memory, thus reducing overhead. We are glad to have built prototypes and systems software for UNIMEM, and to have supported KALEAO through their Development Center in the Science and Technology Park of Crete.” 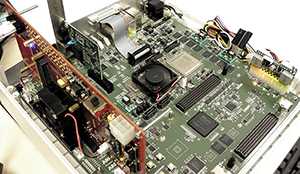 About EUROSERVER: this project is funded by the European Union, under FP7 Grant Agreement 610456. For more information, visit www.euroserver-project.eu or contact Ms. Isabelle Dor - isabelle.dor@cea.fr