The research project GreenVM, for which Prof. Manolis Katevenis, Head of the Computer Architecture and VLSI (CARV) laboratory of the Institute of Computer Science (ICS) of the Foundation for Research and Technology - Hellas (FORTH), and Prof. Panagiota Fatourou, affiliated faculty member of CARV, acted as Principal Investigators, has recently concluded. GreenVM has been funded through the “Excellence” action of the Greek General Secretariat for Research and Technology, operating under the National Strategic Reference Framework 2007–2013. ﻿This Action falls under the Fourth Strategic Objective of the Education and Lifelong Learning (EdLL) Operational Programme (OP), entitled ``Supporting the Human Capital in order to Promote Research and Innovation”. Main focus of the ``Excellence” Action was to support talented researchers in Greek universities and research centers, who have shown important research and professional achievements in order to contribute significantly to scientific progress and broadening of research horizons. The duration of the project was 36 months and was co-financed by the European Commission under the European Social Fund and by the Greek Ministry of Education, Research and Religious Affairsthrough national resources.

Power consumption plays an increasingly important role in multicore and manycore processors. Unfortunately, the power cost of cache-coherent shared memory increases disproportionately with the number of cores, leading the field towards processors without cache-coherent memories. Such architectures require additional effort to manually program and control the memory hierarchy, but at the same time demonstrate better scalability and power-efficiency.

GreenVM developed techniques and tools required by programming languages, runtime systems and language virtual machines that are specifically tailored for low power consumption in such architectures, without sacrificing the ease of programming and fast development times of high-level languages. In the context of GreenVM, a functional, distributed, non-cache-coherent Java Runtime Environment was implemented on top of ENCORE, a prototype manycore architecture, as well as a power-efficient distributed data-structure library tailored for a non cache-coherent manycore architecture. Specifically, GreenVM provided a collection of highly-efficient synchronization primitives and concurrent data structures taking into consideration locality issues, as a power efficient version of the Java concurrency utility package for such architectures. Moreover, the prototype architecture was expanded with power-aware metrics and counters, which were used to evaluate the energy efficiency of the resulting system.

GreenVM conducted research that can be used in order to better exploit the manycore architectures that are expected to be the dominant paradigm in the near future. Java, the language on which GreenVM focused, has a profound impact on the computing world. It is a portable, high-productivity language, used by a plethora of cross-cutting technologies that are applicable to several different market segments of computing systems. Ranging from embedded systems, car computers and cell-phone software like Android, to personal computing and network applications, and up to large-scale datacenter and supercomputing applications, like Hadoop and Google’s map-reduce framework, Java is ubiquitous in the IT industry. Thus, an energy-efficient Java Virtual Machine that scales to upcoming multi-core and many-core architectures will impact the performance of existing systems, facilitate development and production of future applications, and thus significantly shorten the time-to-market for several emerging technologies and products.

The power consumption of multi-core processors is nowadays considered as one of their most important characteristics. By developing techniques and tools for measuring power consumption, GreenVM contributed to a necessary step towards the production of more power-efficient hardware and software. Moreover, it advanced the state of the art beyond existing, intra-core, power-consumption estimation techniques, by targeting novel, scalable multi-core architectures in which inter-core communication and memory become much more significant factors for power consumption. Finally, architectural support for power-consumption estimation in many-core processors unraveled a new field of research in adaptable software that can optimize for power efficiency, communication or peak-performance. 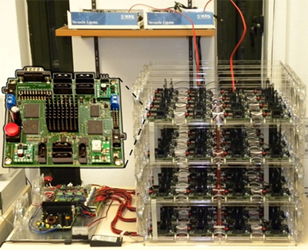 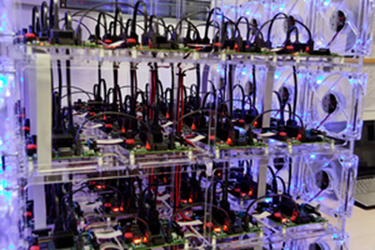 More information about the project are provided at: www.ics.forth.gr/carv/greenvm