CVRL has a modern research infrastructure (including robotic platforms, active vision systems, state of the art workstations, etc.), which facilitates experimentation and the demonstration of research results.

The CVRL robotic platforms are:

OctoBot: Octopus robotic swimmer, an 8-arm compliant robot, able to propel itself underwater by movements of its arms, either alone or interconnected via a passively-compliant web.

NEREIS pedundulatory robots, that combine a unique form of body undulations with numerous active lateral appendages, for locomotion on sand, gravel, mud, grass, and other substrates.

Plato is a 4-wheel skid-drive robotic platform (Activemedia Pioneer 3 AT) capable of performing both indoors as well as outdoors.

FLYBOT, an helicopter that belongs in the category of Rotorcraft Unmanned Aerial Vehicles, RUAV.

A robotic wheelchair equipped with sonar sensors and panoramic vision.

TALOS, an RWI B21 robotic platform equipped with sonar, infrared and bumper sensors as well as a TRC stereoscopic system.

Furthermore, CVRL has extensive expertise in the development of prototype robotic systems, and therefore the potential to extend its research infrastructure. 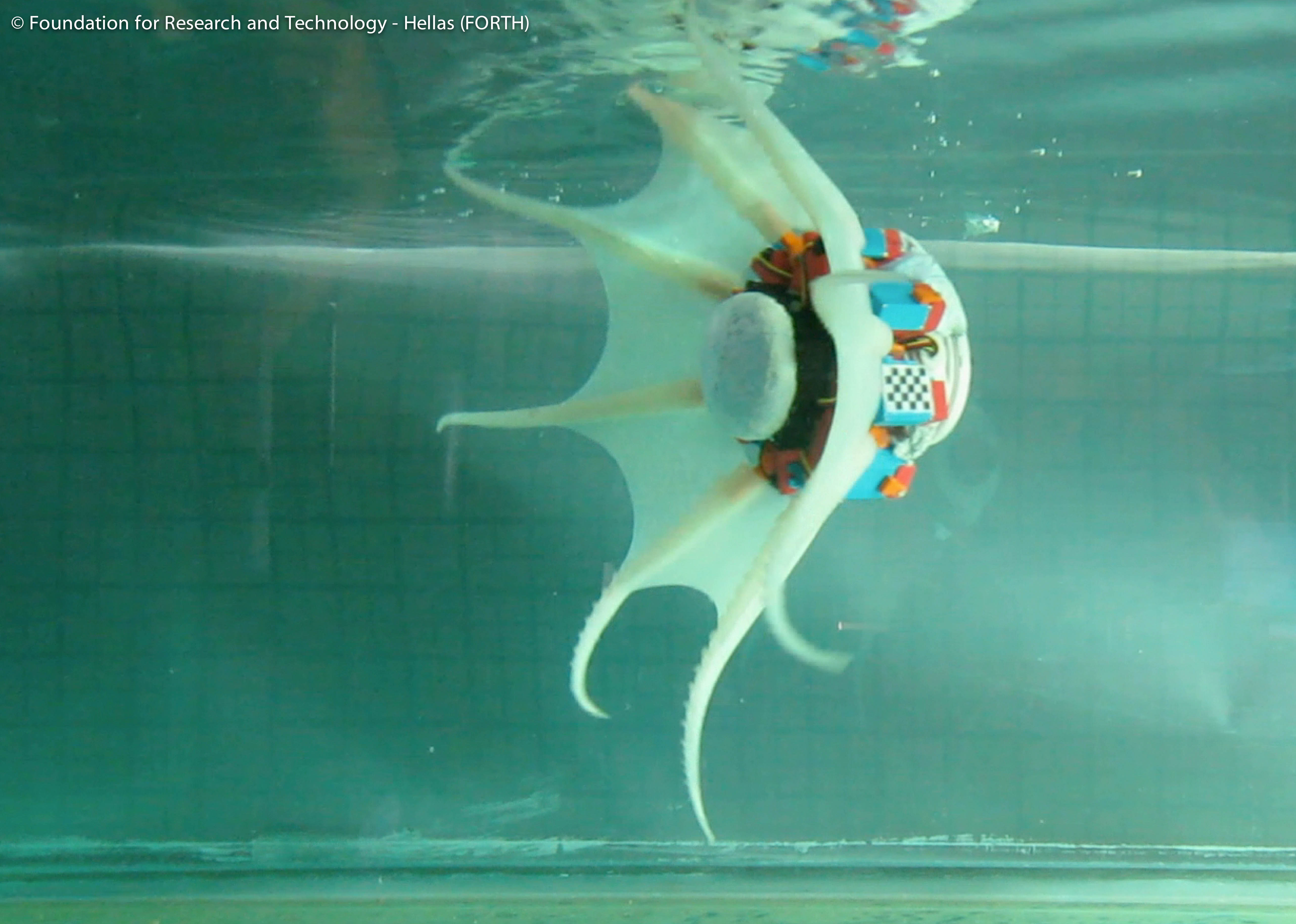 The OctoBot: Octopus robotic swimmer: The 8-arm robot is inspired by the morphology and outstanding locomotor capabilities of the octopus, and is fabricated primarily from compliant materials. Underwater experiments demonstrate a novel mode of underwater propulsion by combining various patterns of sculling movements of the arms and web, and the efficiency of the swimmer, especially with the addition of the web, in terms of the attained velocities, the generated propulsive forces and the cost of transport. 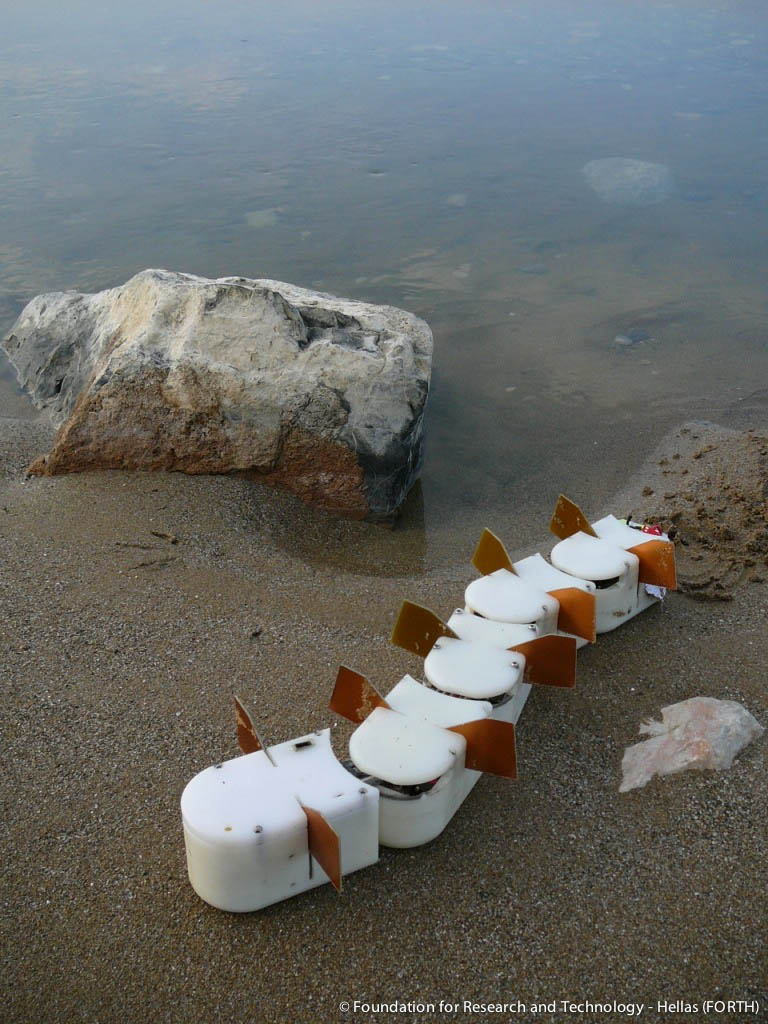 The NEREIS pedundulatory robots: The locomotion of the NEREIS robots is characterized by the combination of a unique form of tail-to-head body undulations (different than snakes or eels), with the rowing-like action of numerous active lateral appendages (called parapodia), distributed along their segmented body. This type of robot locomotion is being studied theoretically, computationally and experimentally, for the first time, by our group at FORTH-ICS, and was named pedundulatory locomotion. The NEREIS robots implement successfully a rich repertoire of pedundulatory gaits on sand, gravel, mud, grass, and several other unstructured substrates. 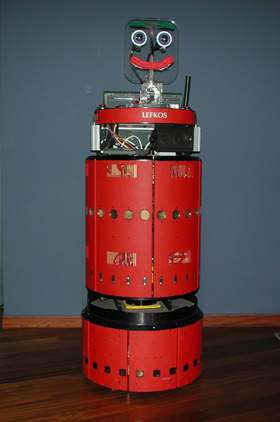 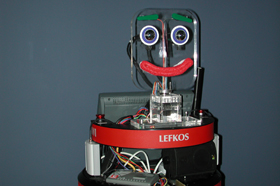 Lefkos is a 4-wheel synchro-drive robotic platform (iRobot B21r) equipped with a large variety of sensors such as ronars, IR proximity sensors, bumpers, cameras and a laser range finder. Lefkos also carries two full-sized Pentium-based personal computers that supply enough computing power to perform autonomously a large variety of navigation tasks. Depending on the application, Lefkos' vision system may consist of a stereovision pan-tilt head with two digital CCD cameras and/or a panoramic camera or, alternatively, a mechanical head capable of expressing emotions.

As a tour-guide robot, Lefkos utilizes a hybrid, discrete-continuous probabilistic navigation system developed within our lab. In this case, the most important sensor of Lefkos is its laser range finder which is capable of scanning 180 degrees of the environment, with an angle resolution of two measurements per degree and a range measuring accuracy of 5cm. Lefkos mechanical head allows interaction with people and expression of emotions. Lefkos head is also equipped with two CCD cameras, comprising this way a stereo vision head with pan capabilities 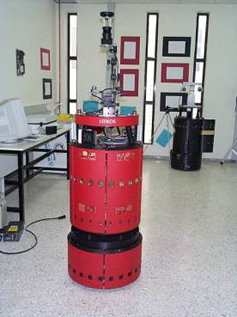 LEFKOS, wearing our Neuronics Panoramic Camera. According to mythology, Lefkos was the son of TALOS. Unfortunately, there is no picture of ancient LEFKOS available. 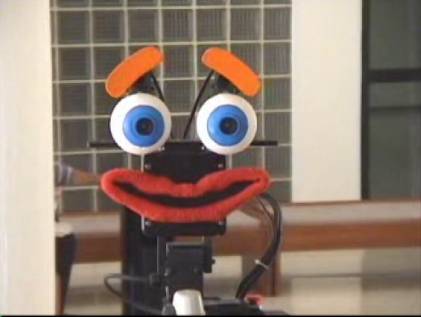 LEFKOS, wearing his head. You can click on the image to get a video of LEFKOS wandering at the entrance of the main building of FORTH 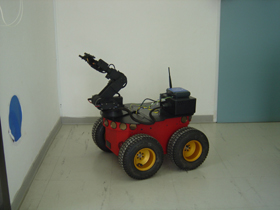 Plato is a 4-wheel skid-drive robotic platform (Activemedia Pioneer 3 AT) capable of performing both indoors as well as outdoors. Plato is equipped with a sonar ring, a laser range finder, a vision system and a five degrees of freedom robotic arm. Moreover, Plato caries a small physical size embedded computer (PC104) with enough processing power to perform onboard a large variety of processing tasks. 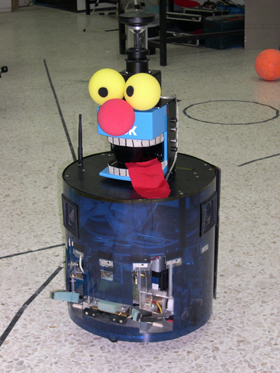 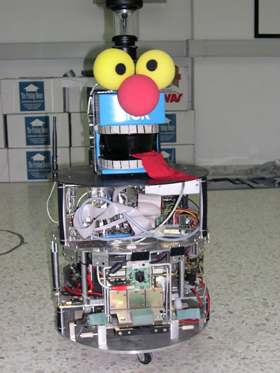 Peleas is differential drive robotic platform, designed and constructed exclusively in the Computer Vision and Robotics Laboratory of FORTH. Both electronic and mechanical parts, as well as the controlling software, are built from scratch and aimed at suiting the research interests of the lab better than the commercial platforms, especially multi-robot cooperation. The platform it is equipped with a ball handling actuator and meets the RoboCup international robotic soccer competition regulations, where autonomous robotic team behaviours are studied and evaluated. Its sensors consist of IR proximity sensors, one panoramic and one wide angle camera, ball distance and ball sensing sensors and a laser range-finder. Peleas carries a full-sized Pentium 4 Linux based computer, which supplies enough power to perform all navigation and image/sensor data processing tasks onboard. The fact that the hardware is custom made and all software is either open-source or in- house, gives great flexibility, expandability and life expectedness to the platform as a research tool for the laboratory. 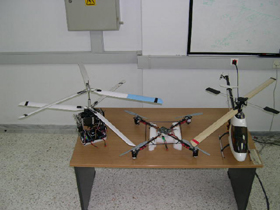 
Helicopters FLYBOT belong in the category of Rotorcraft Unmanned Aerial Vehicles, RUAV. It is constituted from two counterrotating rotors, that are placed in the same axis. Each rotor, apart from contributes at 50% in the total lift of the helicopter, neutralises the torque of the other. Also the diameter of FLYBOT rotros is considerably smaller than that of one rotor helicopters , for the of same weight. Each rotor has its own independent electric engine. Was selected the use of electric engines because they are easier to control and with higher precision, they can start alone, without particular process on behalf of the user. The two last advantages are particularly important for certain applications, where the use of engines of internal combustion would be impossible. Source of energy for the engines and the remaining systems of helicopter are used batteries. The autonomy of the helicopter with usual batteries of nickel-cadmium is roughly 8 minutes. With batteries of lithium (Li-Poly) the time of flight is 30 with 45 mins. For the control of helicopter we have developed a Strapdown Inertial Navigation System, of very small dimensions and very small weight. This system checks 100 times per second the attitude of the helicopter in the space and corrects it, depending on the flight that it should make. Also it is intergrated with GPS. Also the helicopter is provided with a wireless camera. 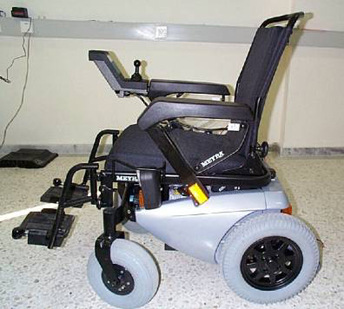 A commercial MEYRA wheelchair for people with disabilities. The above photo was taken when the chair arrived at our Lab. Now it is controlled by a notebook. Moreover, it is equipped with sonar and odometry sensors and a panoramic camera. 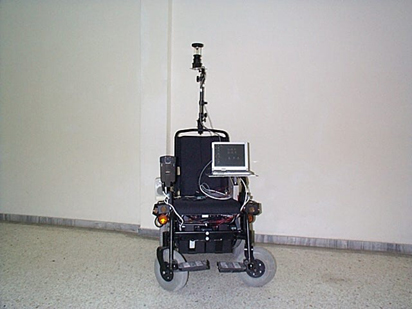 Click on the image to see a video of our chair following TALOS, while TALOS wanders at Zappeion, during the Technology Exhibition organized by the Greek General Secretariat for Research and Technology (GSRT).


An experimental prototype of a robotic wheelchair was built at ICS-FORTH. It is based on a commercially- available power wheelchair, where the sensors, the computing power and the electronics needed for the implementation of the navigation behaviors and of the user interfaces (touch screen, voice commands) were developed as add-on modules. The main hardware components of the robotic wheelchair are:

2) The sensors: The sensory modalities employed are odometry, sonars and panoramic vision. A ring of 6 Polaroid sonars with a range of 6 m and beam width of 20° are used, as well as a Neuronics panoramic camera with a paravoloid mirror and a 360° field of view. The electronics interfacing the sensors with the computer system, as well as those necessary for controlling the sensors and for data collection, were built in-house.

our RWI B21 platform 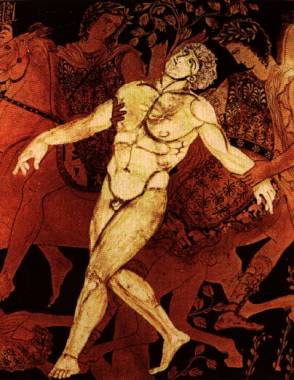 According to mythology, TALOS was the first robot made of coper. It was constructed by Hephaestus, the ancient god of fire. Its goal was to protect the island of Crete. 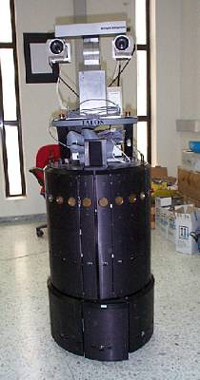 The modern version of TALOS. Click on the image to see TALOS wandering around at his workspace at CVRL.